Home - Who We Are - History

“We must try to expand the boundaries of human wisdom, empathy and perception, and there is no way of doing that except through education”, Senator Fulbright, 1976

The Fulbright Fellowship Program was founded in 1946 under legislation introduced by Arkansas Senator J. William Fulbright, after whom it was named. Since its inception, about 300,000 “Fulbrighters” have participated. Approximately 8,000 new grants are awarded annually in 155 countries. Fulbright Alumni include Nobel and Pulitzer Prize winners, governors and senators, ambassadors and artists, prime ministers and heads of state, professors and scientists, Supreme Court Justices, and CEOs.

Program in the Czech Republic

After the division of Czechoslovakia on January 1, 1993, the Czech and the Slovak Commission have been operating the Program separately within the framework of the original agreement stating that all international agreements signed by Czechoslovakia were binding for its succession states, the Czech Republic and Slovakia.

Between the years 1992 and 2019 the Fulbright Commission supported almost 960 Czech grantees and over 880 U.S. grantees. Apart from that, the Commission provided around 250 travel grants.

Who Was J. William Fulbright?


William Fulbright was born on April 9, 1905 in Sumner, Missouri. He was educated at the University of Arkansas where he was awarded a B.A. in Political Science in 1925. He then attended Oxford University as a Rhodes Scholar where he received a M.A. degree.

He entered politics in 1942 and was elected to the U.S. House of Representatives, entering Congress in January 1943 and becoming a member of the Foreign Affairs Committee. In September of that year the House adopted the Fulbright Resolution, which supported international peace-keeping machinery to encourage United States participation in what became the United Nations. This brought national attention to Fulbright.

In November 1944 he was elected to the U.S. Senate and served there from 1945 through 1974 becoming one of the most influential and best-known members of the Senate. His legislation establishing the Fulbright Program passed through the Senate without debate in 1946. Its first participants went overseas in 1948, funded by war reparations and foreign loan repayments to the United States. This program has had extraordinary impact around the world. There have been more than 250,000 Fulbright grantees and many of them have made significant contributions within their countries as well as to the overall goal of advancing mutual understanding.

In 1949 Fulbright became a member of the Senate Foreign Relations Committee. From 1959-1974 he served as chairman, the longest serving chairman of that committee in history. His Senate career was marked by some notable cases of dissent. In 1954 he was the only Senator to vote against an appropriation for the Permanent Subcommittee on Investigations, which was chaired by Senator Joseph R. McCarthy. He also lodged serious objections to President Kennedy before the Bay of Pigs invasion in 1961.

He was particularly known as a powerful voice in the chaotic times of the Vietnam War, when he chaired the Senate hearings on United States policy and the conduct of the war. In 1963 Walter Lippman wrote of Fulbright: “The role he plays in Washington is an indispensable role. There is no one else who is so powerful and also so wise, and if there were any question of removing him from public life, it would be a national calamity.”:

After leaving the Senate, he was a counsellor to the Washington law firm of Hogan & Hartson and remained active in support of the international exchange program that bears his name.

He has received numerous awards from governments, universities, and educational organizations around the world for his efforts on behalf of education and international understanding. In 1993 he was presented the Presidential Medal of Freedom by President Clinton.

Senator J. William Fulbright died on February 9, 1995 at the age of 89 at his home in Washington, DC. 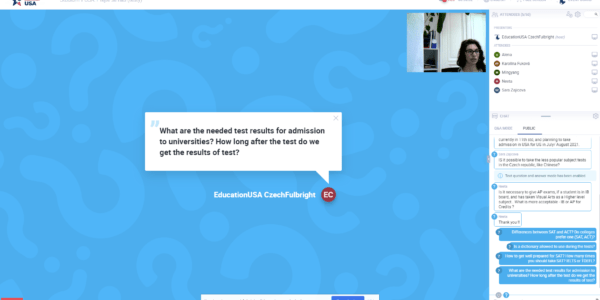 Webinar: Ask us about tests

EducationUSA by Czech Fulbright’s second spring event took place on February 12 and was a continuation of our “Ask us about…” series. This month, our webinar focused on the different admissions tests, including the SAT, SAT Subject tests, GRE, TOEFL, IELTS, and Duolingo exams. In

Fulbright US scholars award for the academic year 2021/2022 opened yesterday. Application on-line will be available on February 14th. Check the Award catalogue for details about program options, contact us for with specific questions at fulbright@fulbright.cz. More details on our web

We are closed between January 29 and February 1, spending time with our US grantees at Midyear conference outside of Prague. Sorry for inconvenience.

We use cookies to ensure that we give you the best experience. If you continue to use this site we will assume that you are happy with it.Accept